In November, Progressive Railroading asked each Class I chief executive officer to address questions pertaining to their 2020 outlook. CSX President and CEO James Foote in early December provided the following responses in an email.

What's your take on the potential for volume growth in 2020 after a difficult year for rail traffic in 2019? Are there certain commodities/business groups you feel pretty good about heading into next year? Which ones are you concerned about, and why? What, predominantly, do you believe will drive business growth in 2020?

CSX and the state of Maryland have agreed to $100 million in additional funding needed to advance the expansion of the long-planned Howard Street Tunnel in Baltimore.In July, Maryland won a $125 million federal grant for the project, which will be conducted in partnership with CSX. The project calls for eliminating height restrictions in the 121-year-old tunnel to allow double-stack trains to move to and from the Port of Baltimore. The work will create double-stack clearance in the tunnel and under 22 bridges between Baltimore and Philadelphia.However, the grant that Maryland obtained in July was $103 million less than the state had requested for the $466 million project. Maryland Gov. Larry Hogan pledged to work with the railroad, which owns the tunnel, and other unnamed stakeholders to come up with the remaining amount. Now, the state and railroad have "identified a variety of state, private and federal formula sources to close the funding gap,” Maryland Transportation Secretary Pete Rahn wrote in a Nov. 25 letter to U.S. Transportation Secretary Elaine Chao, the Baltimore Sun reported last week.Previously, Maryland had proposed providing $147 million for the work, with CSX committing $91 million. Rahn's letter did not break down how much each entity or other stakeholders will contribute, according to the newspaper.“I am pleased to report that our efforts have paid off,” Rahn wrote. “At this point, the $466 million project is fully funded.”A CSX spokeswoman declined to say how much the Class I will pay toward the project until the state makes a public announcement, the newspaper reported. 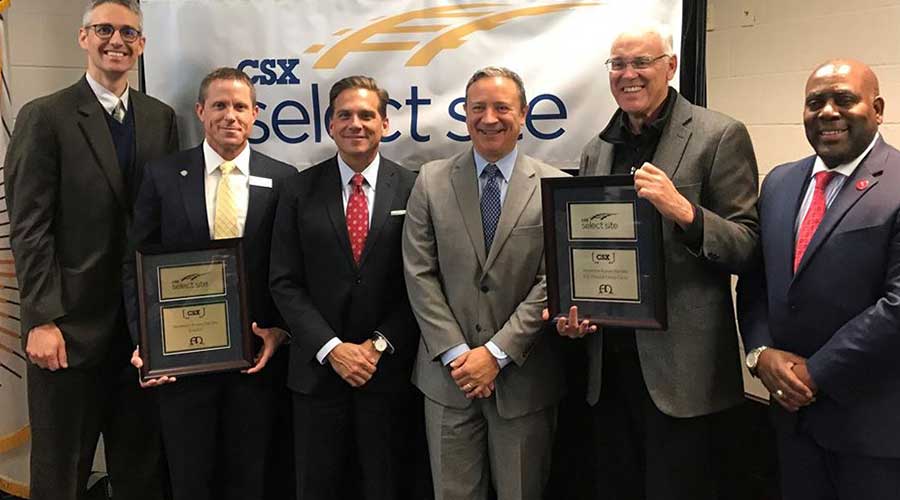 CSX joined local officials this week in announcing that the Henderson Bypass Rail Site in Henderson, Kentucky, has been designated a CSX Select Site.Photo – CSX Facebook

CSX has designated the Henderson bypass rail site in Henderson, Kentucky, as a CSX Select Site.

Select Sites are development-ready properties along the CSX network where standard land use considerations and comprehensive due diligence issues have been addressed. The properties are able to meet the needs of a variety of manufacturers, reducing the time required to build facilities and ultimately bring products to market, CSX officials said in a press release.

CSX has become the first North American railroad to join TradeLens, a global shipping information platform that provides customers with improved supply-chain transparency and shipment-status visibility.Developed by IBM and Maersk, TradeLens is an open, neutral platform that currently includes data on half of the world's ocean container cargo.The platform uses secure blockchain technology to support collaboration across the supply chain and provide customers with timely updates on their shipments.By leading North American railroads onto the platform, CSX is expanding its commitment to greater transparency that enables shippers to manage their supply chains more efficiently, CSX officials said in a press release.“Railroads are vital links in the global supply chain, and CSX wants to support all of the ways our customers are seeking greater efficiency and flexibility," said Mark Wallace, CSX's executive vice president of sales and marketing.As CSX customers move onto TradeLens, the Class I "will be helping provide them with better end-to-end shipment tracking capability," Wallace said.To learn more about the potential use of blockchain technology in the rail realm, read this feature in Progressive Railroading's July issue.

Mantle Ridge sells most of its stake in CSX

The activist that shook up CSX Corp. three years ago has wound down most of its investment in the Class I, The Wall Street Journal reported yesterday.Mantle Ridge LP, the investment vehicle of Paul Hilal, has sold off nearly all of its $1 billion position in CSX, the newspaper reported based on filings with the U.S. Securities and Exchange Commission. CSX bought back about 4.7 million shares.Hilal retains ownership of about 3.4 million shares of CSX, and will continue to serve as a director and vice chair of the railroad's board.Hilal launched the bid to recruit and install veteran railroader E. Hunter Harrison as CSX's chief executive officer after Harrison turned around operations at CN and Canadian Pacific. At the Canadian Class Is, Harrison successfully implemented precision scheduled railroading (PSR) to wring out waste and inefficiencies.Harrison was in the process of launching a PSR system at CSX when he unexpectedly died Dec. 17, 2017.