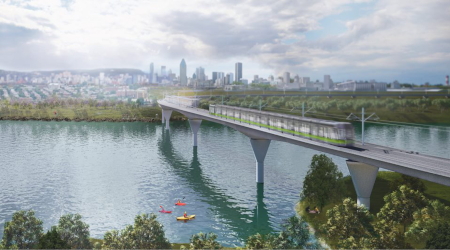 The Saint-Laurent Council in Montreal earlier this week asked the Montreal Agglomeration Council and Quebec Deposit and Investment Fund to modify its original Reseau metropolitan express (REM) light-rail concept in order to build an extension between the Pierre Elliott Trudeau International Airport-based station and the VIA Rail Canada Inc. and Exo intermodal stations.

The REM project would consist of a high-frequency autonomous, electric light-rail transit system between the airport, downtown Montreal as well as interconnections within the Montreal metro system. It will include 26 stations.

“[The extension] would … provide a major intermodal public transit hub around the international airport which, linked to regional train service, would cover all regions of Quebec. These developments would be perfectly in line with the sustainable mobility services that Saint-Laurent wants to offer as a sustainable municipal territory,” said Saint-Laurent Mayor Alan DeSousa in a press release.

Saint-Laurent is a borough of Montreal.